I haven’t been blogging much lately. It’s because I’ve been editing my upcoming novel, Lily’s Fire. At first I was excited. I had the comments back from my editor and was impressed with what he’d picked up on. I followed his advice for weeks on end until I came to the point where I wanted to pull my hair out. It didn’t feel like my own manuscript anymore and it didn’t feel natural. When do you stop? When is the point where you decide it’s good enough for people to read? Because it can always be better…

To be fair, my editor is very good. He knows what he’s talking about and his comments are valuable and valid and I’ve taken his advice on ninety percent of his suggestions. And that’s all good.

This is my first novel and insecure as I am at the moment, I keep on rewriting certain parts over and over again until I feel like my soul has been sucked out of me. Because writing a book is personal, right? It’s putting whatever is inside your head on paper for anyone to read. And even though it’s fiction, there will always be certain parts of you reflected in your work.

It’s been agonising but finally the end is in sight. I’ve been drinking too much lately because I can’t find another way of doing this without throwing my laptop out of the window. In fact, I’m drunk as I’m writing this now so forgive me for typos. Only fifty more pages to go. It’s midnight and maybe I should call it a day but tonight might be the night that I finally finish… 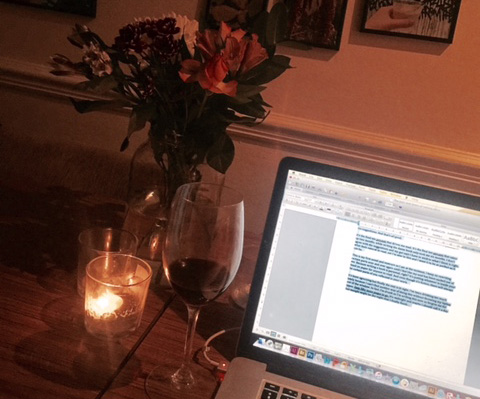 Lise Gold is an author of lesbian romance. Her romantic attitude, enthusiasm for travel and love for feel good stories form the heartland of her writing. Born in London to a Norwegian mother and English father, and growing up between the UK, Norway, Zambia and the Netherlands, she feels at home pretty much everywhere and has an unending curiosity for new destinations. She goes by 'write what you know' and is often found in exotic locations doing research or getting inspired for her next novel. Working as a designer for fifteen years and singing semi- professionally, Lise has always been a creative at heart. Her novels are the result of a quest for a new passion after resigning from her design job in 2017. Since the launch of Lily's Fire (2017) she has written several romantic novels and is currently working on 'The Compass Series'. 'French Summer' (2018) has won a Lesfic Bard Award and 'Fireflies' (2018) was a Goldie finalist. View all posts by lisegold